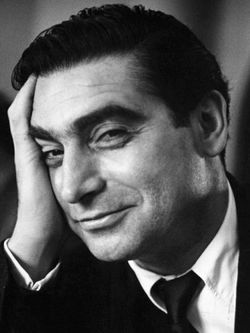 Robert Capa (born Endre Ernő Friedmann; October 22, 1913 – May 25, 1954) was a Hungarian-American war photographer and photojournalist as well as the companion and professional partner of photographer Gerda Taro. He is considered by some to be the greatest combat and adventure photographer in history.

Capa had fled political repression in Hungary when he was a teenager, moving to Berlin, where he enrolled in college. He witnessed the rise of Hitler, which led him to move to Paris, where he met and began to work with Gerta Pohorylle. Together they worked under the alias Robert Capa and became photojournalists. Though she contributed to much of the early work, she quickly created her own alias 'Gerda Taro' and they began to publish their work separately. He subsequently covered five wars: the Spanish Civil War, the Second Sino-Japanese War, World War II across Europe, the 1948 Arab–Israeli War, and the First Indochina War, with his photos published in major magazines and newspapers. He was killed when he stepped on a landmine in Vietnam.

During his career he risked his life numerous times, most dramatically as the only civilian photographer landing on Omaha Beach on D-Day. He documented the course of World War II in London, North Africa, Italy, and the liberation of Paris. His friends and colleagues included Ernest Hemingway, Irwin Shaw, John Steinbeck and director John Huston.

In 1947, for his work recording World War II in pictures, U.S. general Dwight D. Eisenhower awarded Capa the Medal of Freedom. That same year, Capa co-founded Magnum Photos in Paris. The organization was the first cooperative agency for worldwide freelance photographers. Hungary has issued a stamp and a gold coin in his honor.