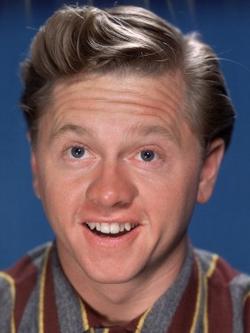 Cause of death: natural cause

Mickey Rooney (born Joseph Yule Jr.; September 23, 1920 – April 6, 2014) was an American actor. In a career spanning nine decades, he appeared in more than 300 films and was among the last surviving stars of the silent-film era. He was the top box-office attraction from 1939 to 1941, and one of the best-paid actors of that era. At the height of a career marked by declines and comebacks, Rooney performed the role of Andy Hardy in a series of 16 films in the 1930s and 1940s that epitomized mainstream America's self-image.

At the peak of his career between ages 15 and 25, he made 43 films, and was one of MGM's most consistently successful actors. A versatile performer, he became a celebrated character actor later in his career. Laurence Olivier once said he considered Rooney "the best there has ever been". Clarence Brown, who directed him in two of his earliest dramatic roles in National Velvet and The Human Comedy, said Rooney was "the closest thing to a genius" with whom he had ever worked. He won a Golden Globe Award in 1982 and an Emmy Award in the same year for the title role in a television movie Bill and was awarded Academy Honorary Award in 1982.

Rooney first performed in vaudeville as a child actor, and made his film debut at the age of 6. He played the title character in the "Mickey McGuire" series of 78 short films, from age 7 to 13. At 14 and 15, he played Puck in the play and subsequent film adaptation of A Midsummer Night's Dream. At the age of 16, he began playing Andy Hardy, and gained first recognition at 17 as Whitey Marsh in Boys Town. At only 19, Rooney became the second-youngest Best Actor in a Leading Role nominee and the first teenager to be nominated for an Academy Award for his performance as Mickey Moran in 1939 film adaptation of coming-of-age Broadway musical Babes in Arms; he was awarded a special Academy Juvenile Award in 1939. Rooney received his second Academy Award nomination in the same category for his role as Homer Macauley in The Human Comedy.

Drafted into the military during World War II, Rooney served nearly two years entertaining over two million troops on stage and radio, and was awarded a Bronze Star for performing in combat zones. Returning in 1945, he was too old for juvenile roles, but too short at 5 ft 2 in (157 cm) for most adult roles, and was unable to gain as many starring roles. However, numerous low-budget, but critically well-received films noir had Rooney playing the lead during this period and the 1950s. Rooney's career was renewed with well-received supporting roles in films such as The Bold and the Brave (1956), Requiem for a Heavyweight (1962), It's a Mad, Mad, Mad, Mad World (1963), Pete's Dragon (1977), and The Black Stallion (1979). For his roles in The Bold and the Brave and The Black Stallion, Rooney received Academy Award nominations for Best Actor in a Supporting Role in 1957 and 1980 respectively. In the early 1980s, he returned to Broadway in Sugar Babies, a role that earned him nominations for Tony Award and Drama Desk Award for Best Actor in a Leading Role in a Musical. He made hundreds of appearances on TV, including dramas, variety programs, and talk shows.