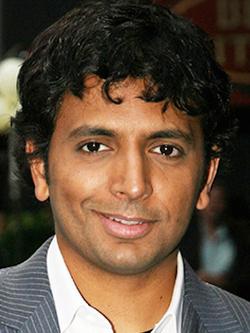 Manoj Nelliyattu "M. Night" Shyamalan ( SHAH-mə-lahn; born August 6, 1970) is an American filmmaker, screenwriter and actor. He is best known for making original films with contemporary supernatural plots and twist endings. He was born in Mahé, India, and raised in Penn Valley, Pennsylvania. The cumulative gross of his films exceeds $3.3 billion globally.

He made his directorial debut in 1992 with the film Praying with Anger. His second film was the comedy-drama Wide Awake (1998). His best-received films include the supernatural thriller The Sixth Sense (1999), the superhero thriller Unbreakable (2000), and the science fiction thriller Signs (2002) and period thriller The Village (2004). For The Sixth Sense, Shyamalan received nominations for the Academy Award for Best Director and the Academy Award for Best Original Screenplay. Afterward, Shyamalan released a series of poorly received but sometimes financially successful films, including the dark fantasy Lady in the Water (2006), the eco-thriller The Happening (2008), The Last Airbender (2010) (an adaptation of the first season of the Nickelodeon animated television series Avatar: The Last Airbender), and the science fiction film After Earth (2013).

Following the financial failure of After Earth, Shyamalan's career was revived with the release of the found footage horror film The Visit (2015), the psychological thriller Split (2016), and the superhero thriller Glass (2019). With a total budget of $34 million between them, these three films earned a combined box office of $625 million. Glass is the third and final chapter of his Eastrail 177 trilogy, which commenced in 2000. His latest feature film was the supernatural thriller Old, which was released in 2021 and grossed $90 million on a budget of $18 million.

In addition to his directorial work, Shyamalan was story creator and a producer for the horror film Devil (2010). Shyamalan was also called in for an uncredited rewrite for the teen film She's All That (1999) and also served as a writer for the film Stuart Little (1999). He is also one of the executive producers and occasional director of Wayward Pines and the critically acclaimed series Servant, for which he also serves as showrunner.

Shyamalan is also known for setting and shooting his films in and around Philadelphia, Pennsylvania, along with nearby Reading, Pennsylvania. Most of his commercially successful films were co-produced and released by Walt Disney Studios' Touchstone and Hollywood Pictures and Universal imprints. In 2008, Shyamalan was honored with the Padma Shri award by the Government of India.