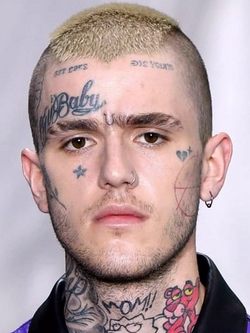 Cause of death: overdose

Gustav Elijah Åhr (November 1, 1996 – November 15, 2017), known professionally as Lil Peep (often stylized as LiL PEEP or lil peep), was a Swedish-American rapper, singer, and songwriter. He was a member of the emo rap collective GothBoiClique. Helping pioneer an emo revival-style of rap and rock music, Lil Peep has been credited as a leading figure of the mid–late 2010s emo rap scene and came to be an inspiration to outcasts and youth subcultures.

Born in Allentown, Pennsylvania, to an American mother and a Swedish father, and raised on Long Island, New York, Åhr started releasing music on SoundCloud in 2013 under the name "Trap Goose", later changing his artist name to Lil Peep because his mother had called him "Peep" since he was a baby. He soon became popular on the platform when he released his breakthrough single "Star Shopping" (2015). His popularity grew with the release of mixtapes Lil Peep; Part One (2015) and Live Forever (2015) later that year. In 2016, Lil Peep released his widely acclaimed mixtapes Crybaby (2016) and Hellboy (2016), along with many other projects including California Girls (2016) and Vertigo (2016).

Lil Peep's first live performance took place on February 12, 2016, in Tucson, Arizona as member of Schemaposse. Later that year Lil Peep toured briefly with Fat Nick, Mikey The Magician, and Smokepurpp. In the spring of 2017, Lil Peep embarked on his first solo tour, performing to packed venues in three Russian cities, making his way across western Europe, and then across the United States. Soon after the tour, Lil Peep emigrated to London, where he recorded his debut studio album. While his mixtapes explored emo, trap, lo-fi and alternative rock, his debut album Come Over When You're Sober, Pt. 1 (2017) was a transition into pop punk and rap rock. His second album Come Over When You're Sober, Pt. 2 (2018) was released in 2018, and debuted at number four on the Billboard 200. The documentary film about him, Everybody's Everything, was released in 2019.

On November 15, 2017, two weeks after his 21st birthday, Lil Peep died on his tour bus before a scheduled performance in Tucson, Arizona during a 33-date tour in the United States.

Source : Wikipedia
born on november 01 born in United States dead at 21 yearsdead in 2017