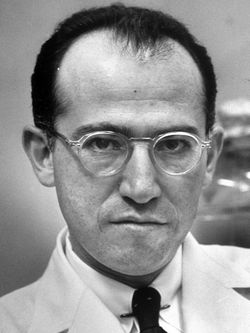 Cause of death: myocardial infarction

Jonas Edward Salk (; born Jonas Salk; October 28, 1914 – June 23, 1995) was an American virologist and medical researcher who developed one of the first successful polio vaccines. He was born in New York City and attended the City College of New York and New York University School of Medicine.

In 1947, Salk accepted a professorship in the School of Medicine at the University of Pittsburgh. It was there that he undertook a project to determine the number of different types of poliovirus, starting in 1948. For the next seven years, Salk devoted himself towards developing a vaccine against polio.

Salk was immediately hailed as a "miracle worker" when the vaccine's success was first made public in April 1955, and chose to not patent the vaccine or seek any profit from it in order to maximize its global distribution. The National Foundation for Infantile Paralysis and the University of Pittsburgh looked into patenting the vaccine but, since Salk's techniques were not novel, their patent attorney said "If there were any patentable novelty to be found in this phase it would lie within an extremely narrow scope and would be of doubtful value." An immediate rush to vaccinate began in both the United States and around the world. Many countries began polio immunization campaigns using Salk's vaccine, including Canada, Sweden, Denmark, Norway, West Germany, the Netherlands, Switzerland, and Belgium. By 1959, the Salk vaccine had reached about 90 countries. An attenuated live oral polio vaccine was developed by Albert Sabin, coming into commercial use in 1961. Less than 25 years after the release of Salk's vaccine, domestic transmission of polio had been eliminated in the United States.

In 1963, Salk founded the Salk Institute for Biological Studies in La Jolla, California, which is today a center for medical and scientific research. He continued to conduct research and publish books in his later years, focusing in his last years on the search for a vaccine against HIV. Salk also campaigned vigorously for mandatory vaccination throughout the rest of his life, calling the universal vaccination of children against disease a "moral commitment". Salk's personal papers are today stored in Geisel Library at the University of California, San Diego.