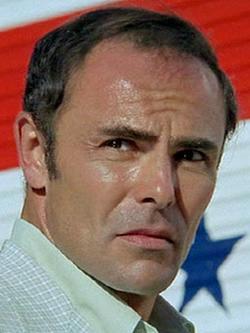 Cause of death: acute pneumonia

John Saxon (born Carmine Orrico; August 5, 1936 – July 25, 2020) was an American film and television actor who worked on more than 200 projects during a span of 60 years. He was known for his work in Westerns and horror films, often playing police officers and detectives.

Born and raised in Brooklyn, New York, Saxon studied acting with Stella Adler before beginning his career as a contract actor for Universal Pictures, appearing in such films as Rock, Pretty Baby (1956) and Portrait in Black (1961), which earned him a reputation as a teen idol and won him a Golden Globe Award for New Star of the Year – Actor. During the 1970s and 1980s, he established himself as a character actor, frequently portraying law enforcement officials in horror films such as Black Christmas (1974) and A Nightmare on Elm Street (1984).

Saxon appeared in numerous Italian films from the early sixties. In a 2002 interview, he said of this period: "At the time Hollywood was going through a crisis, but England and Italy were making a great many films. Besides, I thought the European films were of a much more mature quality than most of what Hollywood was making at the time." Saxon appeared in Italian productions all through the 1970s and 1980s, up until 1994, when he made Jonathan of the Bears.

In addition to his roles in horror films, Saxon co-starred with Bruce Lee in the martial arts film Enter the Dragon (1973), and he had supporting roles in the westerns The Appaloosa (1966; for which he was nominated for a Golden Globe for Best Supporting Actor – Motion Picture), Death of a Gunfighter (1969) and Joe Kidd (1972), as well as the made-for-television thriller Raid on Entebbe (1977). In the 1990s, Saxon occasionally appeared in films, with small roles in Wes Craven's New Nightmare (1994) and From Dusk till Dawn (1996).