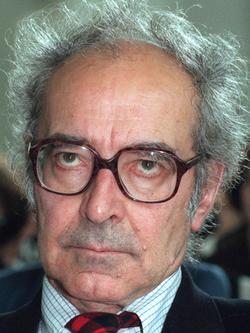 Jean-Luc Godard (UK: GOD-ar, US: goh-DAR; French: [ʒɑ̃ lyk ɡɔdaʁ]; 3 December 1930 – 13 September 2022) was a French-Swiss film director, screenwriter, and film critic. He rose to prominence as a pioneer of the French New Wave film movement of the 1960s, alongside such filmmakers as François Truffaut, Agnès Varda, Éric Rohmer, and Jacques Demy. He was arguably the most influential French filmmaker of the post-war era. According to AllMovie, his work "revolutionized the motion picture form" through its experimentation with narrative, continuity, sound, and camerawork. His most acclaimed films include Breathless (1960), Vivre sa vie (1962), Contempt (1963), Band of Outsiders (1964), Alphaville (1965), Pierrot le Fou (1965), Masculin Féminin (1966), Weekend (1967), and Goodbye to Language (2014).

During his early career as a film critic for the influential magazine Cahiers du Cinéma, Godard criticised mainstream French cinema's "Tradition of Quality", which de-emphasised innovation and experimentation. In response, he and like-minded critics began to make their own films, challenging the conventions of traditional Hollywood in addition to French cinema. Godard first received global acclaim for his 1960 feature Breathless, helping to establish the New Wave movement. His work makes use of frequent homages and references to film history, and often expressed his political views; he was an avid reader of existentialism and Marxist philosophy, and in 1969 formed the Dziga Vertov Group with other radical filmmakers to promote political works. After the New Wave, his politics were less radical and his later films are about human conflict and artistic representation "from a humanist rather than Marxist perspective."

Godard was married three times, to actresses Anna Karina and Anne Wiazemsky, both of whom starred in several of his films, and later to his longtime partner Anne-Marie Miéville. His collaborations with Karina—which included such critically acclaimed films as Vivre sa vie (1962), Bande à part (1964), and Pierrot le Fou (1965)—were called "arguably the most influential body of work in the history of cinema" by Filmmaker magazine. In a 2002 Sight & Sound poll, Godard ranked third in the critics' top ten directors of all time. He is said to have "generated one of the largest bodies of critical analysis of any filmmaker since the mid-twentieth century." His work has been central to narrative theory and has "challenged both commercial narrative cinema norms and film criticism's vocabulary." In 2010, Godard was awarded an Academy Honorary Award.