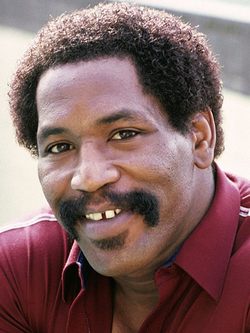 Cause of death: overdose

Charles Aaron "Bubba" Smith (February 28, 1945 – August 3, 2011) was an American professional football player, who starred as a defensive end in both college and the NFL before becoming an actor following his retirement from the sport.

Smith first came into prominence at Michigan State University, where he twice earned All-American honors on the Spartans football team. He had a major role in a 10–10 tie with Notre Dame in 1966 that was billed as "The Game of the Century." He is one of only six players to have his jersey number retired by the program. He was inducted into the College Football Hall of Fame in 1988.

The first selection of the 1967 NFL Draft, Smith played nine years in the National Football League (NFL) with the Baltimore Colts (1967–1971), Oakland Raiders (1973–1974), and Houston Oilers (1975–1976). He was the Colts' starting left defensive end for five seasons, playing in Super Bowls III and V. He was named to two Pro Bowls and was a First-Team All-Pro in 1971. He had tremendous quickness despite being 6 feet 7 inches (2.01 meters) tall and weighing 265 pounds, (about 120 kilograms), a combination which usually earned him a double-team.

During his acting career, Smith specialized in comedic roles in film, television, and television advertising. For about a decade following his retirement from football, he appeared in various commercials for Miller Lite. His best-known role was as Moses Hightower in the first six Police Academy movies.

Source : Wikipedia
born on february 28 born in United States dead at 66 yearsdead in 2011