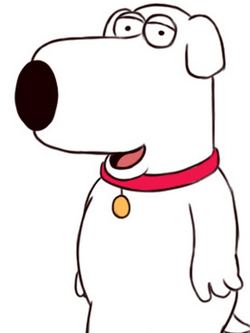 H. Brian Griffin is a fictional character from the American animated television series Family Guy. An anthropomorphic white labrador voiced by Seth MacFarlane, he is one of the show's main characters as a member of the Griffin family. He primarily works in the series as a less-than-adept writer struggling to find himself, attempting essays, novels, screenplays, and newspaper articles.

He first appeared on television, along with the rest of the family, in a 15-minute short on December 20, 1998. Brian was created and designed by MacFarlane himself. MacFarlane was asked to pitch a pilot to the Fox Broadcasting Company, based on The Life of Larry and Larry & Steve, two shorts made by MacFarlane featuring a middle-aged character named Larry and an intellectual dog, Steve. After the pilot was given the green light, the Griffin family appeared in the episode "Death Has a Shadow".

Brian has been featured in many items of merchandise for Family Guy, and he is considered to be one of the show's biggest merchandising characters. He has also made crossover appearances in the other MacFarlane-produced shows, such as American Dad! and The Cleveland Show.

As a character, Brian was initially very well received by critics although reception in later years has been mixed. When Brian was killed off in the season 12 episode "Life of Brian", the events of the episode received substantial attention from the media and elicited strongly negative reactions from fans of the show. Brian subsequently returned two episodes later, in "Christmas Guy", after Stewie, his best friend, traveled back in time to save him.