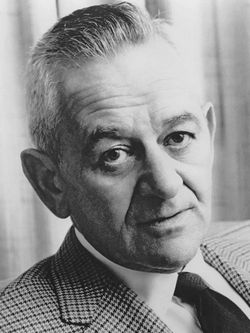 Cause of death: heart attack

Born in Alsace, then in Germany, but later part of France, Wyler was a troublemaker in the schools of his youth. He emigrated to United States in 1921, working first for Universal Studios in New York before moving to Los Angeles. By 1925, he was the youngest director at Universal, and in 1929 he directed Hell's Heroes, Universal's first sound production filmed entirely on location. In 1936, he earned his first nomination for the Academy Award for Best Director for Dodsworth, starring Walter Huston, Ruth Chatterton and Mary Astor, "sparking a 20-year run of almost unbroken greatness.": 24

He helped propel a number of actors to stardom, including finding and directing Audrey Hepburn in her debut film, Roman Holiday (1953), and directing Barbra Streisand in her debut film, Funny Girl (1968), both winning Academy Awards. Olivia de Havilland and Bette Davis both won their second Oscar in Wyler films, de Havilland for The Heiress (1949) and Davis for Jezebel (1938). Davis said Wyler made her a "far, far better actress" than she had ever been, while Laurence Olivier, who received his first Oscar nomination for Wyler's Wuthering Heights (1939), credited Wyler with teaching him how to act for the screen. Wyler's three Best Picture-winning films each featured a Best Actress or Actor Oscar winner - Greer Garson in Mrs Miniver, Frederic March in The Best Years of Our Lives, and Charlton Heston in Ben-Hur. Other popular Wyler films include: The Westerner (1940) with Gary Cooper, The Letter (1940) again with Davis, Detective Story (1951) with Kirk Douglas, Friendly Persuasion (1956) with Cooper, The Big Country (1958) with Gregory Peck and Heston, The Children's Hour (1961) with Hepburn, Shirley MacLaine and James Garner, and How to Steal a Million (1966) with Hepburn and Peter O'Toole.

Film historian Ian Freer calls Wyler a "bona fide perfectionist", whose penchant for retakes and an attempt to hone every last nuance, "became the stuff of legend.": 57  His ability to direct a string of classic literary adaptations into huge box-office and critical successes made him one of "Hollywood's most bankable moviemakers" from the 1930s to 1960s. Through his talent for staging, editing, and camera movement, he turned dynamic theatrical spaces into cinematic ones. For his work Wyler was awarded the Irving G. Thalberg Memorial Award for career achievement, the Director's Guild of America Lifetime Achievement Award, and the American Film Institute Life Achievement Award.