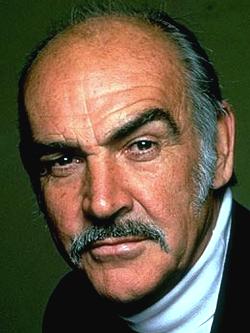 Cause of death: respiratory failure

Sir Sean Connery (born Thomas Connery; 25 August 1930 – 31 October 2020) was a Scottish actor. He was the first actor to portray fictional British secret agent James Bond on film, starring in seven Bond films between 1962 and 1983. Originating the role in Dr. No, Connery played Bond in six of Eon Productions' entries and made his final appearance in Never Say Never Again.

Connery began acting in smaller theatre and television productions until his breakout role as Bond. Although he did not enjoy the off-screen attention the role gave him, the success of the Bond films brought Connery offers from notable directors such as Alfred Hitchcock, Sidney Lumet and John Huston. Their films in which Connery appeared included Marnie (1964), The Hill (1965), Murder on the Orient Express (1974), and The Man Who Would Be King (1975). He also appeared in A Bridge Too Far (1977), Highlander (1986), The Name of the Rose (1986), The Untouchables (1987), Indiana Jones and the Last Crusade (1989), The Hunt for Red October (1990), Dragonheart (1996), The Rock (1996), and Finding Forrester (2000). Connery officially retired from acting in 2006, although he briefly returned for voice-over roles in 2012.

His achievements in film were recognised with an Academy Award, two BAFTA Awards (including the BAFTA Fellowship), and three Golden Globes, including the Cecil B. DeMille Award and a Henrietta Award. In 1987, he was made a Commander of the Order of Arts and Letters in France, and he received the US Kennedy Center Honors lifetime achievement award in 1999. Connery was knighted in the 2000 New Year Honours for services to film drama.